Production of TMCP steel plates up to 100 mm 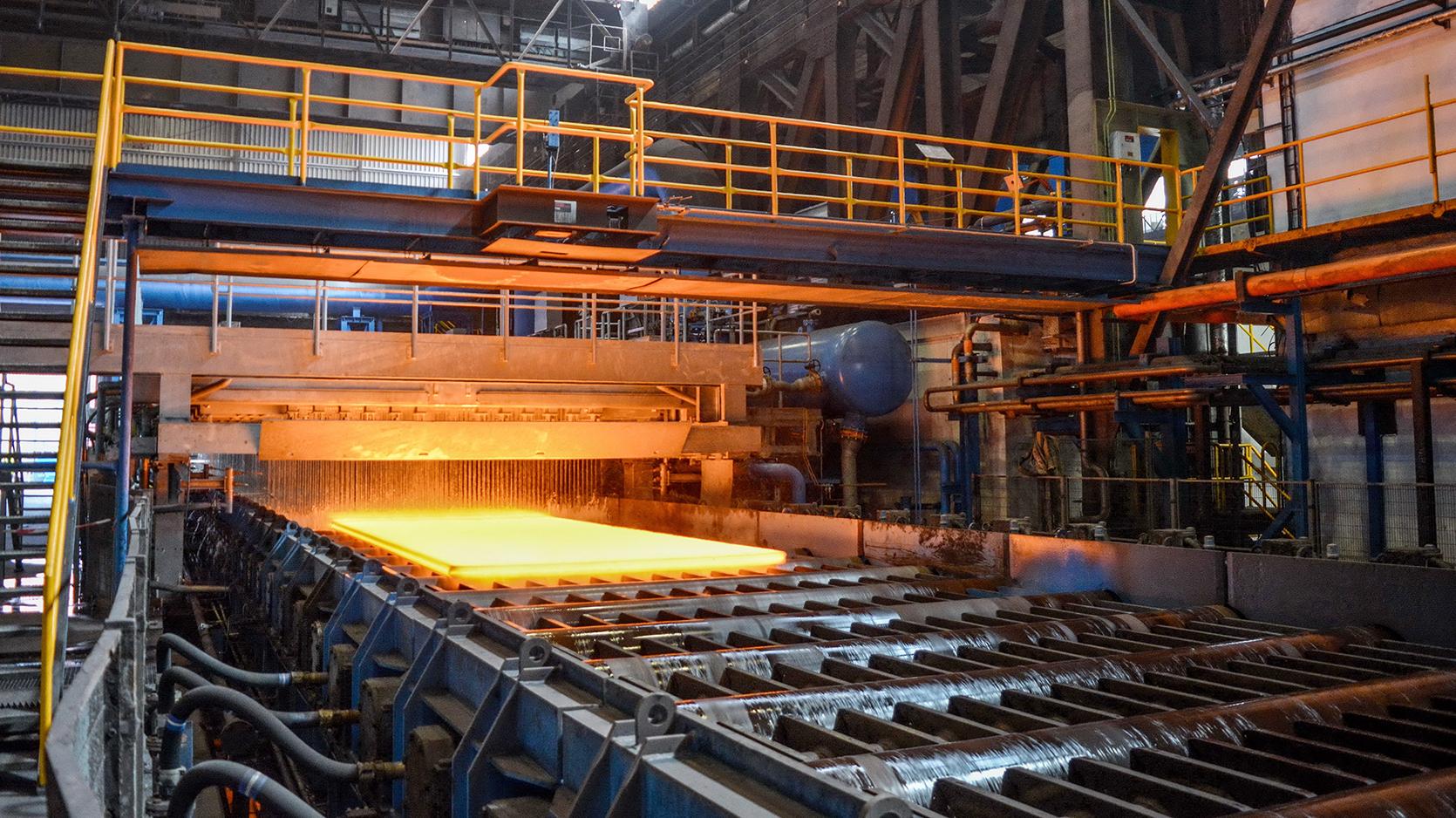 It is more difficult to determine the correlation relationship between the chemical composition, technological process parameters, microstructural condition and the range of mechanical properties for heavy plates made of low-carbon microalloyed steel over 60 mm in thickness. The major reason is the difference in temperature and degree of through thickness cumulative deformation, which is important for the formation of the final microstructure and mechanical properties. As shown in Figure 3 and 4, the choice of optimal technological parameters of TMCP+ACC is extremely important and, when combined with correct steel alloying/microalloying, increases the possibility of obtaining the final microstructure condition with uniform qualitative and quantitative indicators. Separate works will be dedicated to the selection of optimal technological parameters for different chemical compositions, but the overall goal is to expand the intervals of phase/structural transformations by means of target alloying and ensuring that the potentially maximum heavy plate “volume” gets into these temperature intervals taking into account a certain difference observed during deformation and accelerated cooling. As an example, Figure 5 illustrates the microstructural conditions of S420ML heavy plate 100 mm in thickness after the application of three TMCP+ACC modes. Steel with CEQ 0.34% was used.

TMCP+ACC mode No. 1 was implemented with end rolling temperature (Tend roll.) close to the starting point of γ➝α-transformation (Ar3). Consequently, the temperature interval of the AC onset was below Ar3. The ACC end temperature (TAC end) was in the range of 600-580 °C.

Due to the mentioned technological parameters of TMCP+ACC, the microstructure of 1/8 and 7/8 thickness of plate (Figure 5.1.1 and 5.1.5) is characterized by the presence of a large number of large deformed ferrite grains and high-irregularity bainitic packages. The target microstructural condition, which is a homogeneous mixture of ferrite and bainite, was obtained in 1⁄4 thickness (Figure 5.1.2). The 1⁄2 and 3⁄4 thickness microstructure (Figure 5.1.3 and 5.1.4) is a mixture of ferrite and pearlite which is indicative of an insufficient cooling rate in correct temperature region (for the given chemical composition) and its asymmetry as against the top and the bottom surfaces of heavy plate.

TMCP+ACC mode No. 2 was implemented with end rolling temperature (Tend roll.) below the starting point of γ➝α-transformation Ar3. The ACC end temperature was also in the range of 600-580 °C. The results of analysis of the microstructural condition allow to conclude that 1/8 thickness of plate (Figure 5.2.1) is characterized by a hard-worked ferrite-pearlite microstructure. The target microstructural condition, which is a highly homogeneous mixture of ferrite and bainite, was obtained in 1⁄4 and 3⁄4 thickness (Figure 5.2.2 and 5.2.4). The bottom surface (Figure 5.2.5) is characterized by an increase in the number of large deformed ferrite grains and bainitic packets and is equivalent to the microstructure of Figure 5.1.1. in terms of quality and quantity. The 1⁄2 thickness microstructure (Figure 5.2.3) is a mixture of ferrite and pearlite which is also indicative of an insufficient cooling rate for the given chemical composition in correct temperature region.

TMCP+ACC mode No. 3 was implemented with end rolling temperature above the starting point of γ➝α-transformation Ar3 by 15–20 °C. The ACC of plate also started before γ➝α-transformation. The ACC intensity was increased and the oscillation (reverse motion) of plate inside the AC was added. The ACC end temperature was in the range of 540–520 °C. The results of analysis of the microstructural condition allow to conclude that 1/8, 1⁄4 and 7/8 thickness (Figure 5.3.1, 5.3.2 and 5.3.5) have a fine dispersion target mixture of ferrite and bainite. 1⁄2 and 3⁄4 thickness have an increased share of ferrite component and a small amount of pearlite that was released mainly at the triple point boundaries between ferrite grains. It should be concluded that among the analyzed examples the best result in terms of qualitative and quantitative parameters of the microstructure was obtained in TMCP+ACC mode No. 3.